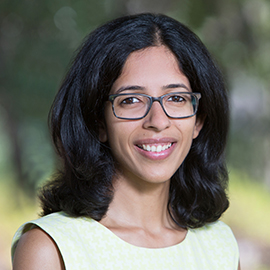 Our qualitative data help to generate hypotheses that we test using (a) personnel data on individual worker productivity, where workers experience quasi-random switches between male and female supervisors, and (b) a lab-in-the-field experiment, where we experimentally manipulate supervisors’ ability to perform subordinate scut work. This paper contributes to the literature on motivating worker productivity by drawing attention to the important role of manager gender and by studying a female-typed workplace. The paper also contributes to the literature on gender and leadership by investigating objective worker productivity and uncovering subordinate scut work as a novel managerial practice that fosters engagement with work and improves worker productivity.

Professor Aruna Ranganathan spent her childhood in the Middle East, India and Singapore before graduating with honors from University of British Columbia’s Sauder School of Business with a B.Com in Organizational Behavior and Human Resources in 2006. She also received an MS in International and Comparative Labor from Cornell University’s School of Industrial and Labor Relations in 2008 and an MS/Phd in Management from MIT’s Sloan School of Management in 2014. Her doctoral dissertation, “Working with Your Hands: Essays on Craft Occupations in India” explored the intersection between economic sociology, the sociology of work and industrial relations.