A delegation of researchers, professors and ministry employees from the Centro de Investigaciones Psicológicas y Sociológicas (CIPS; the Center for Psychological and Sociological Research) and the Centro Félix Varela in Cuba recently visited the Erb Institute for Global Sustainable Enterprise at the University of Michigan to learn about its social and environmental sustainability work.
The group included Ovidio D’Angelo, Mirlena Rojas, Jusmary Gómez, María Vilaboy and Liana Bidart. CIPS works with at-risk families, aging populations, lacking infrastructure and capacity building. The center also houses Mapa Verde, which works on sustainable development and climate change risk management in Cuba. Some participants’ work includes labor studies, formation of state-owned businesses and cooperatives, and mixed state- and foreign-owned, small and medium-sized private businesses. Other issues they focus on include social inclusion, intergenerational dialogue, collaborations with other institutions and linking academic research with practical applications.

The U.S. Political Landscape and the Cuban Economy

The Cuban delegation offered their perspective on how the Cuban economy is changing and how shifts in U.S. relations are affecting the economy. Since relations between the United States and Cuba began to normalize in 2014, when President Barack Obama started to rebuild the countries’ economic and diplomatic relationships, the Cuban economy has quickly become more diverse, the visitors explained.

However, last June, President Donald Trump announced directives that would restrict some of these developments. For example, Trump’s restrictions include barring Americans from doing business with Cuban-military-controlled companies, which encompass much of the country’s tourism sector.

The delegates expressed concern that these limitations would harm the business sector in Cuba. These restrictions are likely to dampen expectations of social progress and strain some relationships, one participant said.

The Benefits of an Open Economy 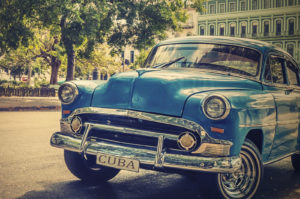 A more open economy creates opportunities for Cuba in general—but particularly for cooperatives and self-employed people. An open economy can create “a climate of greater possibilities for strengthening civil society,” one participant noted.

Because state-owned business has dominated Cuba’s economy, more openness invites more possibility. This might include more variation in the degree of state ownership in businesses, as well as a more diversified civil society. New non-state-owned companies, such as self-owned companies and cooperatives outside of farming—are “producing a dynamic expansion of offers, innovation and mobilization of financial resources that were before unthinkable,” one representative said. Public-private partnerships and businesses’ social responsibility efforts also benefit from a more open economy.

The profits of state-owned businesses are also helping to form the base of a centralized redistribution of income. That income supports critical community needs, such as free health care and education, the visitors pointed out. Academics and NGOs have suggested a broadening of business social responsibility, which could directly benefit the community and vulnerable populations—but that approach has not yet gained much traction.

The visitors stressed the critical importance of the Cuban academic community continuing to participate in the greater global conversation through international events, academic exchanges, research projects and publications. These collaborations can raise broader awareness—now and in the future—of persistent and emerging social issues. These conversations will continue to generate recommendations for political decision-makers in Cuba, as well as spread to broad sectors of the population, one participant said.