At the Erb Institute, our students collaborate with students across campus—from both other schools and other programs. By nature, they are curious and driven to make a difference in the world using their business acumen and sustainability smarts. We sat down with ‘Erber’ Iulia Bleanda-Mogosanu, who has been working on a team that is building a prototype single-stage distillation unit. This apparatus has the potential to desalinate water in coastal communities that are deteriorating because of insufficient access to fresh water. This is a cool story in itself, but we also wanted the scoop on the genesis of this idea and Iulia’s role.

How did you first become involved in this project?

Iulia: Pablo Taddei and I were colleagues at the School for Environment and Sustainability (SEAS), both in the Sustainable Systems track with the same focus on energy. While we were in class, we talked about our background and things we were interested in and passionate about. We realized we are both interested in sustainability in the energy industry and alternative uses of renewable energy technologies. Pablo is a native of Hermasillo County in Mexico—a region that is along the Sonora coast. Hermasillo, as with many coastal communities, has been experiencing severe water scarcity due to saline contamination of the wells, which is further aggravated by low precipitation.

Pablo was interested in finding a sustainable solution to this problem and subsequently began probing ideas that would desalinate the abundant source of ocean water. I realized that the potential of such a solution had far-reaching implications globally. It was clear to me that the commercial potential of this idea was scalable to different conditions in different regions of the world. We jointly decided to turn it into a business plan and began to build a team to support the technology development and prototype construction, and to define a realistic business model to support commercialization.

What role have you played on this team?

We found our respective and differentiated skill sets to be very complementary. Pablo’s engineering background supported the technical side. My Ross and SEAS education and previous business experience gave me the tools to create the business model, get the funding and develop a comprehensive strategy for the whole project.

How did the project and the team grow after its inception?

Initially our team was the two of us. The project picked up steam after garnering financial support through the Dow Sustainability Award, and then the Erb Institute, Sustainability Without Borders, SEAS and the Energy Institute. Support and advice came in many forms from faculty, staff members and other institutions, including Ross. This was the point at which we began to have critical mass and invited additional members to the team who brought particular competencies needed to get the project to the next level.

What specific previous experience has been useful in moving the project forward?

I have a strong academic background in economics as well as professional experience in corporate banking. I managed many investments in this role and worked with subsidiary banks from different countries. This international exposure proved useful in figuring out in which regions the project could be implemented and the type of market research we would need to support it. I also had previously co-founded a startup, so, in addition to having an entrepreneurial mindset, I also had the confidence and know-how to commercialize an idea and make it a viable business.

What advice can you give to other students who might want to get involved in interesting and viable sustainability projects but don’t know where to start?

From my personal experience, the first step is to network as much as possible—with your colleagues first of all. Share about your background, your passions and what you’re interested in. This is the way to identify mutual interests that you might have with other people. If there is common ground, find a time to just brainstorm ideas—especially ideas that might have potential as an Erb Institute Impact Project or that might have potential for future commercialization. So, initially, just nework a lot and talk to your colleagues a lot!  Also, you need to get to know people and their working styles so you get a sense of compatibility. Ask yourself: Could we pull off this idea that we’re interested in?

The next step is to start talking to professors. They’re an extremely useful resource! It’s also important to find a faculty advisor for the idea and then start to identify resources available on campus, particularly with respect to research and funding opportunities. Ask questions! Get as much information as possible. Talk with institutions like the Erb Institute. Our project received a tremendous amount of support not only from faculty but also from staff members, who provided useful guidance on navigating the University of Michigan system. For example, the idea to include the Energy Institute came after talking to staff.

Take full advantage of the many resources available at the University of Michigan. The faculty and staff are sincere in their desire to help students be the leaders and best, and they will help you to push your idea and project forward. We could not have done this on our own—it has been a team effort in more ways than one. Stay tuned for part two of our interview with Iulia! 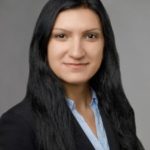