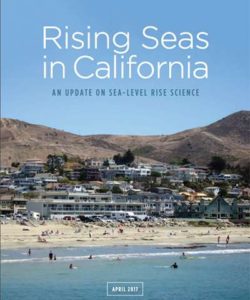 In a compelling analysis of the factors that affect how much the ocean will rise along California’s coast in coming decades, a seven-member team of experts led by UC Santa Cruz geologist Gary Griggs has issued a report on the best-available sea-level rise science.

The report includes recent scientific advances on the role of polar ice loss and new information on the expected sea level changes that will occur based on different greenhouse gas emission scenarios. For example, with very successful mitigation efforts, the report states that there is a 67 percent probability that the Bay Area will experience sea level rise between 1.0 foot and 2.4 feet by 2100. However, if no significant mitigation efforts are taken, that range increases to 1.6 to 3.4 feet.
The report also emphasizes the importance of preparing for extreme but uncertain scenarios involving the rapid loss of the Antarctic ice sheet, which would have an enormous impact on coastal regions. In one such scenario, sea levels along California’s coastline could rise up to 10 feet by 2100, about 30 to 40 times faster than sea-level rise experienced over the last century.

“Although our scientific understanding is rapidly increasing, waiting for scientific certainty about the rate or ultimate amount of sea-level rise is neither a safe nor prudent option,” said Griggs, chair of the science team and professor of Earth and planetary sciences at Santa Cruz. “The sea-level rise projections presented in this report provide the scientific foundation for taking action today, preparing our coastal communities and mitigating hazards, and preventing much greater losses than will occur without action now.”

The previous report, released in 2010 and updated in 2013, included a range of projections over various timescales, but did not estimate the likelihood that such levels would be met. The scientific team’s new report includes information on the likelihood of specific scenarios and provides a framework for evaluating risk, adaptive capacity, and consequences from rising seas. This will allow local and state stakeholders to weigh the costs and benefits of taking action now against the potential harmful effects of inaction.

The science report will inform California’s sea-level rise guidance document, which will help cities and counties as they comply with state law that requires them to incorporate climate change into their planning efforts. The updated guidance document will also assist state agencies prepare for and adapt to sea level rise, as directed by Governor Brown’s April 2015 executive order on climate change. Public input will be integrated into the final guidance document update, which is scheduled for adoption by the California Ocean Protection Council in January 2018.

Among their key findings: