This is Part 2 in a series of Erb Perspective Blogs from the Erb Directors.

I’ve been in La Habana, Cuba this week, attending a series of meetings related to the research and engagement agendas of the Erb Institute. 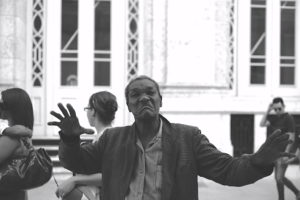 During a walk near my hotel, I met this wonderful man, who would not share his name.

But he would gladly pose for a portrait in exchange for a couple of chavitos. Here’s the result.

This brings me to another point: There isn’t a single person I met in Cuba who has a hate on for America. Not a single one.  Sure, I’ve seen some skepticism.  But for every dose of skepticism, I got two doses of hope.

In the few short days I’ve been here, I’ve also met dozens of people wishing for a better life.  And, while there’s an appetite for consumerism here—Coca Cola, Nike shoes, and iPhones, just to name a few—there’s an even stronger desire for more basic needs: Infrastructure improvements, modernization of the agricultural sector, better regulations to protect human and environmental health, and legitimacy on the world stage.  During my conversations with researchers, practitioners, and even a few government representatives, I’ve observed a growing appreciation for the the important role that an integration approach to sustainable development—involving the public sector, and a slowly emerging private sector—will need to play in order to bring about these changes.

I’ll confess at the outset to not being an expert on Cuban-American relations.  But, if America’s experiences with the likes of China, Myanmar, and Mexico are any indication, the path to friendship and trust is dialogue.  It’s not hubristic appeals to anti-Castro Americans by promising to “get tough” on Cuba. It’s not closing down the U.S. Embassy, which serves as a beacon of hope to many young Cubans.  And, it’s not more sanctions on a country that is already suffering under significant economic hardship.

In Cuba’s case, it’s going to be leadership by example that does the trick: Dialogue and openness that leads Cuba’s political leaders to put a stop to the repression of internal dissent, and to introduce much-needed political reform.  To suggest otherwise reflects a fundamental misunderstanding of human nature, not to mention history.