In America, the agricultural sector is responsible for barely one percent of total energy consumption. But it’s a different picture in India, where a whopping 18 percent of the nation’s electricity goes to power agricultural water pumps.

Problems in Indian Agricultural Water Distribution
There are multiple reasons for that, according to Ross Business School alumnus and sustainability professional Karan Dangayach. The standard form of irrigation in India is flood irrigation, a common but inefficient system that involves pumping large amounts of water onto fields. Furthermore, the amount of water needed, and the energy required to move it, are also particularly large in India, where the top crops are water-intensive rice and sugarcane.

Electrified agricultural communities are often a considerable distance from the nearest power
plant, magnifying the distribution losses of energy that occur between any power plant and electricity user.  Lastly, agricultural subsidies make electricity cheap or free for many farmers. “Compared to all other consumers, they care less about how power is being used, so they use it less and less efficiently,” Dangayach says.

Solar-powered Water Pump Savings
It seems like a vicious and unsustainable cycle, but Dangayach identifies a new solution that could benefit farmers, the Indian 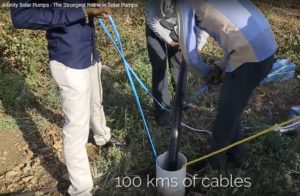 Private companies who invest in solar installations can also benefit at tax time from the accelerated depreciation the Indian government allows on solar power-related equipment. 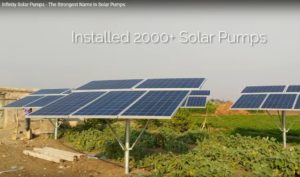 Solar Pumps Part of Growing Sustainability Trend
Dangayach says both the Indian government and some farmers have already begun to see the benefits of solar pumps. In agricultural regions that aren’t electrified, Dangayach says some more well-to-do farmers have begun to invest in solar pumps on their own to replace the costly diesel fuel they would otherwise use to power their pumps. By Dangayach’s calculations, that saves them about 140,000 rupees or $2,000 USD annually per pump. Not surprisingly, in addition to those actions by private farmers, the Indian government has also begun subsidizing some agricultural solar pump installations.

“They’re leapfrogging the grid. By avoiding installation and maintenance of [electrical] lines they ultimately deliver power to the farmer free of cost,” Dangayach says. “They’d rather just give them a solar pump. It will pay itself off in about 10 years, it serves the farmer for 25 years and ultimately it’s less of a headache for the government.”

Dangayach says the budding shift towards solar pumping fits in with a set of recent progressive trends in Indian agriculture. Those include an increase in more efficient drip irrigation systems, the rise of mobile phone technology in obtaining pricing and other information, and a shift from growing traditional rice and sugarcane to growing more value-added crops like fruits and vegetables. Dangayach says there’s “a lot of interest and a lot of action” when it comes to solar power in India right now, but there’s still plenty of work to be done in communicating its value to farmers and the government.

“Compared to the potential, the amount of solar is miniscule right now,” he says. “However, the industry has grown quite crazily in the last three years. I would say that we started small because anything starts from there. But it is moving toward a very, very large portion of the entire energy mix.” 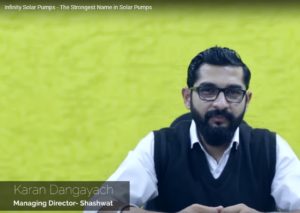 Karan Dangayach is passionate about the use of clean technology and policy in how it can reverse climate change. He is an alum of The Ross School of Business and one of the founders of Shashwat Cleantech (Shashwat), which is in the businesses of Solar PV Projects, Solar PV Pumps and LED Lighting. He has worked in the consumer goods, communications and non-profit sectors prior to Shashwat. When not selling solar, Karan likes to play squash and perform with his band.