Five Weeks of Entrepreneurial Exploration: Connecting to and learning from social entrepreneurs across the United States 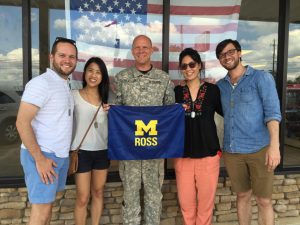 Our team with Kevin McManus, a veteran in Daleville AL and founder and CEO of Discovery Recycling.

Across America, 89% of businesses employ less than 20 people. These small organizations represent the backbone of our economy.

On May 1, 2016 I set out on a five week road trip as part of Ross Open Road with three other Ross MBAs to discover the heartbeat that keeps these businesses going. The premise of Open Road, formerly MBAs Across America, is simple: five weeks in five different cities with five different social impact or community minded entrepreneurs.

For the entrepreneur, our group becomes part of their team and they benefit from some of the MBA knowledge we have gained over the past year. For us, it is an opportunity to understand the unique struggles and triumphs of a woman that was inspired to pivot from her career following the 2010 BP Oil Spill, or a family that has survived 28 years of community changes to become a beacon of stability in their neighborhood. Over the course of our five weeks on the road, our team endeavored, to push the needle even just a small bit further in the work they are committed to.

For myself, I couldn’t have known the impact these five weeks would have on everything from my understanding of the word “entrepreneur,” to the grit, self-doubt, passion and vital partnerships that characterizes the daily lives of the vast majority of business owners in the United States.

In our planning process, our team deliberately chose a diverse group of entrepreneurs with a range of backgrounds and experiences, cross-cutting geographies, company missions and methods of delivery. For example, we tackled a Thanksgiving holiday operational model and costing analysis for the Thomas’ at Sweet Potato Sensations in Detroit; value chain definition and best practices of the e-cycling space for Kevin McManus at Discovery Recycling in Daleville, AL; a pro forma and scenario-based analysis for Tippy Tippens with Goods that Matter in New Orleans; human resource structure and communication plans for Claire Morel with AMP360 in Austin, TX; and an analysis of Connecting for Good’s model effectiveness for Tom Esselman in Kansas City.

Prior to the start of every week, we had a series of calls to determine where we could make the greatest impact. One of the sole consistencies in our work was meeting the entrepreneur where they were in their journey, and ensuring that our suggestions were relevant to their needs and maturity as a company. Our time wasn’t about making change for five or ten years down the road; it was about making an impact tomorrow.

My initial motivation to spend five weeks with Open Road was twofold. First, I want to maximize the MBA/MS – to pursue as many interests as possible to maximize the completeness of my graduate experience. My second reason was empathy. Despite having traveled the world in the Navy, there are entire social ecosystems I do not understand. Open Road was the opportunity to push myself out of my comfort zone, listen more than I speak, make a positive impact with partner entrepreneurs and form a bond with my three other travelers in five short weeks. Throughout it, I learned five paramount lessons. 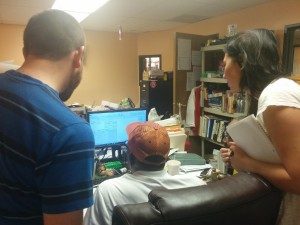 Lesson 1: Entrepreneurship is not synonymous with Silicon Valley or Venture Capital.

Before Aaron, Blake, Iris and I met with the Thomas family at their restaurant Sweet Potato Sensations in Detroit. Observing a steady stream of local patrons order their famous sweet potato pies, we began to understand how our perceptions of entrepreneurship would be challenged. Espy Thomas, Jeff and Cassandra’s daughter, relayed to us the dominant narrative that Sweet Potato Sensations was often viewed as anything but entrepreneurial. At 28 years old, it is neighborhood icon in an economically depressed area of Detroit. Sweet Potato sensations is often overlooked by a burgeoning community of sexy co-working spaces, bourgeois textiles and high-tech apps contributing to Detroit’s urban renewal.

Working alongside the Thomas’, not only did I see entrepreneurship in their support of the community and other local businesses, but I also saw a family-run business that has survived 28 years of community turnover, politics transformations, and difficult economic realities. Through it, they have adapted and grown while maintaining their commitment to the ideals and deliciousness that inspired their business in the first place. 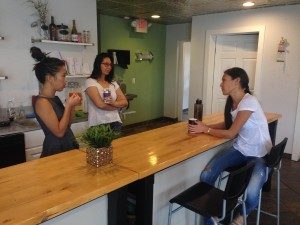 Lesson 2: An entrepreneur cannot stand alone, even with the best of ideas.

“Tippy isn’t about making a buck, she is about making a difference,” one of Tippy Tippen’s, Chief Eternal Optimist of Goods that Matter, retail partners in New Orleans. From Detroit to Kansas City, we saw the critical contribution of community support in helping a small business survive. This thinking was also continually reflected back by the community partners about their local entrepreneurs. A successful entrepreneur truly has an ecosystem of suppliers and buyers, believers, supporters, and champions. “Networking” is a term that we throw around the Winter Garden at Ross to relate to recruiting, or getting to know our fellow MBAs. Never once did I hear the word “networking” with the entrepreneurs. It was about finding people that connected to the work they were doing, and about the countless hours that went in to nurturing, building upon and giving back to their community. Despite the incredible differences in geographies, missions and organizational structures of the entrepreneurs this idea of the community and their place within it was a constant. 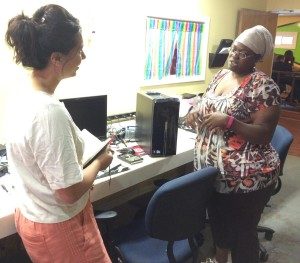 Lesson 3: “Entrepreneur” is rarely used as a form of self-identification.

It was interesting to see the variability in how entrepreneurs self-identify. Despite having started a company in my first year at the School of Natural Resources and Environment with three other graduate students, I still struggled with the self-identifying as an “entrepreneur.” Each of the five individuals we partnered with identified as the thing they were trying to create: maker, recycler, and cafe owner. This concept underscores the importance of exposing MBAs to small organizations – it’s about redefining business categories, and of reconsidering the labels that are applied to business. 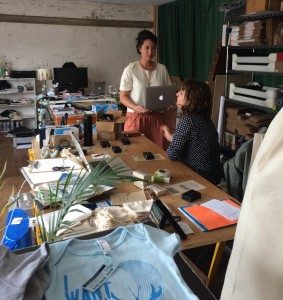 Tippy, Chief Eternal Optimist, of Goods that Matter in New Orleans is no stranger to tough times, and also triumphant ones.

Starting something new, adapting to changing times, evolving your brand and building a support base that empowers success, is exhausting. It requires immense amounts of energy, even on days that you have none. Despite the glory often attributed to being an entrepreneur in today’s media, for small businesses and entrepreneurs it is a constant struggle of identity and the often unanswered question of “am I doing what I should be doing with my life?”

To our team, on the outside, it was easy for us to proclaim “Yes! What you are doing is important, it is necessary!” Our team found that,if nothing else, this external validation and support was paramount to any other advice we could have provided. 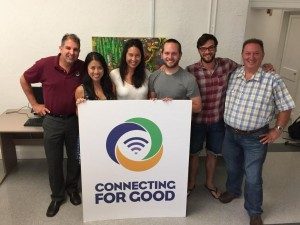 CEO Tom Esselmen and Co-Founder Rick Deane at Connecting for Good in Kansas City, are working to bridge the digital divide through a holistic, wraparound approach.

Lesson 5: Whether or not someone has an MBA, business is a tool for social good.

During my dual-degree experience, I have heard of numerous examples of social intrapreneurship and social enterprises reshaping the way that business can contribute to issues of social and environmental justice. This thinking was constantly reinforced during our Open Road experience.

As graduate business students we are afforded an opportunity to think about the difference we want to make in our world, and we have a plethora of people to inspire us along the way.

Open Road will stand as one of the most important experiences as an Erber. My team had an opportunity to bond deeply over issues around social impact, business for good, and the future projections of our careers. We also encountered numerous adventures and misadventures along the road, living through everything as a unit. Ultimately, the most rewarding aspect was the relationships we developed with the entrepreneurs. Each week we tore ourselves away from a small community that we had built. Throughout Open Road and into the rest of the summer, we continued to circle back to the five entrepreneurs, to share in their progress on the work that we did together. This was the truly transformative element of our journey; hearing the entrepreneurs talk about the impact we built together.

MAP, Master’s Project – everything about Erb is to drive that hands-on, engaged experience with the world. Open Road was a full embodiment of that. The lessons I’ve learned from my five-week Open Road experience will be with me for a long time to come. 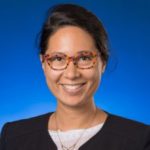