I feel a tiny pin prick to my heart when I see a fellow student casually toss a soda can into the trash. Plastic bottle: pin prick. Half-eaten pizza: pin prick. Wadded-up napkins: pin prick.

When I arrived on campus, I was in awe of the Ross Business School’s waste system. Waste bins were neatly placed in waste stations finished with a beautiful granite countertop. Michigan offered single-stream recycling, and Ross upped the ante by fully integrating post-consumer compost. I love compost. Though municipalities have struggled to reap the economic potential of city-wide compost systems, I felt comforted knowing that Ross made composting a priority (despite the need to hand-sort bins to remove contamination), and that at least some of our organic waste was converted into a useful resource.

As the fall progressed, I realized that the people who had access to this waste system weren’t using it properly. I passed trash cans full of recyclables and watched classmates dump their food scraps into the trash, so I joined forces with the Erb Institute and Net Impact at Ross to investigate.

After several months of meeting and coordinating with the Ross Operations team, the Ross Green Team, Tuthill Farms (Ross’s composting contractor), interested students and staff, individuals within the University of Michigan Office of Waste Reduction & Recycling, and U-M’s Planet Blue team, we were ready for the real deal—the first-ever Ross Waste Audit & Education Day. Our goal was to encourage students, faculty, staff and visitors passing through the Ross building to think about their waste habits and what happens to their waste after it is “thrown out,” to improve the school’s waste reduction and diversion.

The day-long event was split in two, with the morning focusing on the audit itself, and the afternoon on waste education. The intent of the audit was to capture a snapshot of current waste habits, which would be used to inform improvements to the waste system within the Ross School of Business’s current and future buildings. The latter half of the day focused on educational, waste-themed games, activities and information gathering. The interactive portions were designed to spark conversations about waste and engage people who weren’t naturally interested in measuring every ounce of waste and contamination. 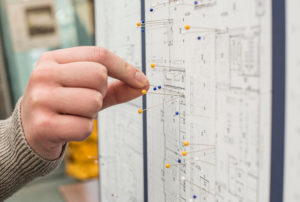 Just before 8 a.m., our crew gathered in the Winter Garden ready for the audit. We spread out a nearly 30×20-foot tarp in the building’s primary common space, suited up in our protective gear, and hauled out the previous day’s waste (100 percent of the recycling and 50 percent of the compost and trash), ready to greet everyone as they entered the building through the main entrance. We began with the trash. Trash bags were ripped open onto the tarp, spilling out half-eaten sandwiches, crumpled papers, dozens of Starbucks cups and some less-than-appetizing unidentified liquids, among many other soiled items. Each item was resorted into the correct bin—trash, recycling or compost—and then the new bags were weighed to calculate the amount of waste generated from each stream and the rate of contamination. We continued the process for each type of waste, polishing off 40 bags! 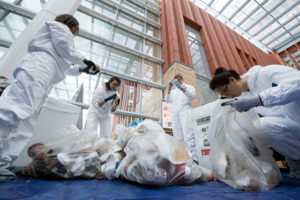 The result of the audit was staggering. More than 50 percent of the Ross waste was miss-sorted. The trash was littered with recyclables and compostables, and the compost was contaminated with everything from plastic utensils and cups to Styrofoam containers. Along with the more objective results, we sorted through interview questions, the “Pin Your Bin” bin-placement suggestions and the “Post Your Thoughts” thoughts, perceptions and waste secrets collected from the afternoon’s activities. We also reviewed additional qualitative and quantitative information from the “All About that Waste” survey conducted by a group of students through the +Lab.

Ultimately, we found several commonalities among people who participated:

Really, who can argue with someone who says, “While I always PREFER to direct waste in the right direction, I am only willing to carry that waste so far to do so.” It is unreasonable to expect everyone to hold onto their lunch waste until it can be properly sorted. If someone sits near Blau and then walks out the north entrance, she would have to wait until she arrived at her next location to pass a recycling bin, and  that location likely wouldn’t have a compost bin.  Who can blame the classmate who replies, “I’m confused . .  I thought everything in Seigle was supposed to be compostable?” The packaging mystery in Seigle certainly was confusing.

The findings were compiled to inform recommendations and conversations with Ross Facilities & Operations as well as Seigle, with the specific intent to improve the ease and rate of waste diversion within Ross, and to reduce overall waste. The goal is to reduce Ross’s current impact, but also to serve as a way to further ingrain sustainability into our personal habits and the U-M culture, coincidentally one of the university’s top sustainability goals.

Though the audit has come and gone, I often think about how we can we involve the entire Ross community to extend our efforts after we graduate. I believe the mission of waste reduction and diversion is worth perpetuating, and I thank the many who have come before me for championing the university’s compost and waste system, which I now hope to protect and improve. As we think about Ross and its reputation as a top business school focused on impact and action-based learning, we must not forget the impact of our waste. 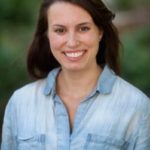