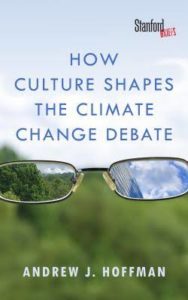 Book description: Though the scientific community largely agrees that climate change is underway, debates about this issue remain fiercely polarized. These conversations have become a rhetorical contest, one where opposing sides try to achieve victory through playing on fear, distrust, and intolerance. At its heart, this split no longer concerns carbon dioxide, greenhouse gases, or climate modeling; rather, it is the product of contrasting, deeply entrenched worldviews. This brief examines what causes people to reject or accept the scientific consensus on climate change. Synthesizing evidence from sociology, psychology, and political science, Andrew J. Hoffman lays bare the opposing cultural lenses through which science is interpreted. He then extracts lessons from major cultural shifts in the past to engender a better understanding of the problem and motivate the public to take action. How Culture Shapes the Climate Change Debate makes a powerful case for a more scientifically literate public, a more socially engaged scientific community, and a more thoughtful mode of public discourse.

This book has been featured in: