Honoring Earth Day: Tom Gladwin reflects on a career dedicated to the pursuit of sustainability 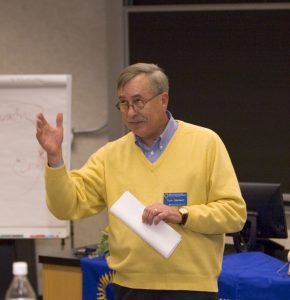 Over the past 16 years, Thomas N. Gladwin has provided the vision, leadership, inspiration and dedication that has enabled the Erb Institute for Global Sustainable Enterprise to become the world’s foremost institution for sustainable-enterprise education, and has fostered an influential body of students and alumni who, as change agents, are transforming business, government and nonprofit organizations worldwide.

Now, as Gladwin prepares to retire at the end of April 2014, he talks enthusiastically about the highlights and impact of his decade and a half at the Institute. Gladwin’s tenure began in 1998 when he was appointed the  Max McGraw Chair of Corporate Environmental Management and faculty director of the Corporate Environmental Management Program, or CEMP, the precursor of today’s Erb three-year master’s dual-degree program. Gladwin served as Erb director until 2006 when he became associate director.

“That first year was challenging, because I came into a program that suffered from an absence of leadership and secure endowment funding,” he recalls. “During the first five years of my leadership, we raised $15 million in endowment money and put the entire Erb program on solid footing for perpetuity.” The new funding included a second $5 million gift from benefactors Fred, BBA ’47, and Barbara Erb and two corporate gifts: $2.5 million from Holcim (U.S.) Inc. and $2.5 million from Dow Chemical Co.

With Erb’s endowment secured, Gladwin turned his attention to building enrollment in the three-year MBA/MS program. “When I came to Michigan, we had only a handful of students in CEMP,” he says. “Through our efforts, we were able to achieve an exponential increase in enrollment, and, in the 2000s, the program really took off. I’m quite proud to have been part of that early process.” Gladwin attributes Erb’s meteoric rise to the University of Michigan’s consistent ranking, beginning in 1998, as a top-tier school for environmental and social impact in the biennial Beyond Grey Pinstripes Report, sponsored by the World Resources Institute and the Aspen Institute. “Once we started being reviewed by an outside institution and began getting the No. 1 world ranking in early 2000, our external promotion, visibility and reputation soared,” he says.

On the University of Michigan campus, Gladwin faced quite a different challenge in winning acceptance for the Erb Institute and its students. “We were a very minor part of the School of Business Administration and the School of Natural Resources and Environment, which jointly created CEMP, and we were viewed as kind of a deviant bunch,” he recalls. “However, as we grew our enrollment, the old and new deans of both schools began to see the Erb program as one of their most popular graduate programs. What started as something very small has become a catalytic change agent and a mainstream institution,” he remarks. “You can see evidence of this in many ways. The Ross School of Business now has the largest chapter of Net Impact in the world and is viewed as the go-to place for sustainability education in relationship to business leadership. SNRE has become known as the place to mix business and environmental knowledge..”

As the Erb Institute gained traction, it helped to shape the emerging field of sustainable-business education. “A lot of other universities have tried to copy us, but they don’t have the right mix of massive faculty and our tremendous ability to raise money through the endowment process,” Gladwin explains. “At Erb, we have three professors ─ Andy Hoffman, Tom Lyon and myself ─ who hold joint appointments and have one leg in each school. That has provided the foundation for our success.”Erb’s high-caliber teaching and research also have distinguished it from other institutions. “We were able to introduce a new suite of coursework in sustainable enterprise and no other school has been able to replicate it,” Gladwin says. “This has clearly made us a global leader in both the breadth and depth of sustainable-business education.”

Excellence in teaching and research also has been the hallmark of Gladwin’s own career trajectory at Michigan. “My most important impact on teaching and research has been promulgating systems thinking, which has been deemed the No. 1 cognitive skill for leadership in the future,” he says. “This is important, because the world is becoming so much more complex, uncertain and rapid in the velocity of change. The only way to make sense of everything is to make connections, see patterns and understand how the system is operating.” In 1999, Gladwin introduced systems thinking by launching an all-University lecture series on sustainable development and business, which featured talks by the world’s leading experts and authors on sustainability and attracted standing-room-only audiences. The lecture series, he says, “was the catalyst for the U-M as a whole moving toward sustainability.” The series evolved into a joint Ross-SNRE graduate course on Systems Thinking for Sustainable Development and Enterprise that continues to draw students from business and natural resources, as well as engineering, public health economics and other disciplines.

From the very beginning, Gladwin was a good fit for the Erb Institute. “I got into this field early on and stayed,” he says. “I completed my MBA at Michigan in 1971 and went into advertising, where I was assigned to introduce a new laundry detergent and was told to lie about it. I learned early on that the world of Madison Avenue was a corrupt place. That brought me back to U-M to get my Ph.D. in International Business and Natural Resource Policy in 1975. I felt I needed to do something that would have a positive impact on the environment and society.” While Gladwin was a doctoral candidate, he taught the first undergraduate course on global environment at the School of Business Administration in 1972.

To date he has received four awards for “Excellence in Teaching” and, in 2003, was presented with the “Faculty Pioneer Award for Lifetime Achievement” by the World Resources Institute and the Aspen Institute. Gladwin also is the recipient of 30 foundation and academic awards for research on ecologically and socially sustainable commerce from major national organizations, including the National Science Foundation and the Energy Foundation.  He has authored or co-authored more than 160 articles, cases and chapters on international and environmental management, as well as eight books.

One of Gladwin’s lasting memories is the time he spent with Fred and Barbara Erb. Beginning in early 2000, he would take students to Erb Lumber Co. headquarters in Birmingham, Mich., to meet with the Institute’s founding benefactor. “Fred was a tough-minded businessman and was very loyal to the University of Michigan,” Gladwin remembers. “He used to ask very tough questions, and his eyes would light up when he saw the students.” Gladwin speculates that Barbara’s concern about her grandchildren and the world they would inherit was a key motivation behind the couple’s sizeable endowment gifts to the Institute. “Barbara once said to me, ‘Tom, save the Earth for my grandchildren,’” he recalls. “I think she impressed on Fred how important the mission was to protect the environment.”

During his time at the Erb Institute, Gladwin has done his utmost to fulfill Barbara Erb’s lasting and greatest wish to save the Earth. “I’ve taken students to the ‘dark side’ [of the sustainability debate] to balance out the overly optimistic view of the future they receive in other courses,” he says. “I’ve trained more than 2,000 students in global change and systems thinking. The base of alumni leadership arising from the Institute now represents a very positive and increasingly powerful force for running businesses in an environmentally responsible way. I’ve also helped to get Erb into a very healthy financial endowment situation that ensures it will continue to exist 5,000 years from now.”

If there’s a dark cloud hanging over Gladwin’s future, it is his deeply felt disappointment at the absence of progress in solving the world’s major environmental and social problems. “I’m retiring in a world of deep concern about the welfare of future generations,” he remarks. “I’m saddened when I think about the threats to human survival ─ including global climate change, water scarcity, conflict, poverty and migration ─ that my own grandkids will have to confront.”

Still, there’s a bright side to the doom-and-gloom scenario. Gladwin plans to continue his teaching duties as an emeritus professor at U-M and will devote more time to his consulting business. He and his wife have converted a horse barn on their farm outside Ann Arbor into a solar-passive environmental retreat and creative center that houses their artistic venture, Red Barn Studios. “My new passion is to do art, and I’m creating outdoor sculptures using antique metal parts and stones,” Gladwin says. “The pieces are selling quite well, so you’ll be able to catch me at art shows over the summer.”

Claudia R. Capos has more than 25 years of experience in journalism, publications and media relations. A graduate of the University of Michigan’s School of Journalism, she co-founded and co-published About Ann Arbor Magazine for five years before joining The Detroit News where, over a 10-year period, she held a variety of writing and editing positions and received three Pulitzer Prize nominations. She is a frequent contributor to Erb Institute publications.